Welcome to the GSV 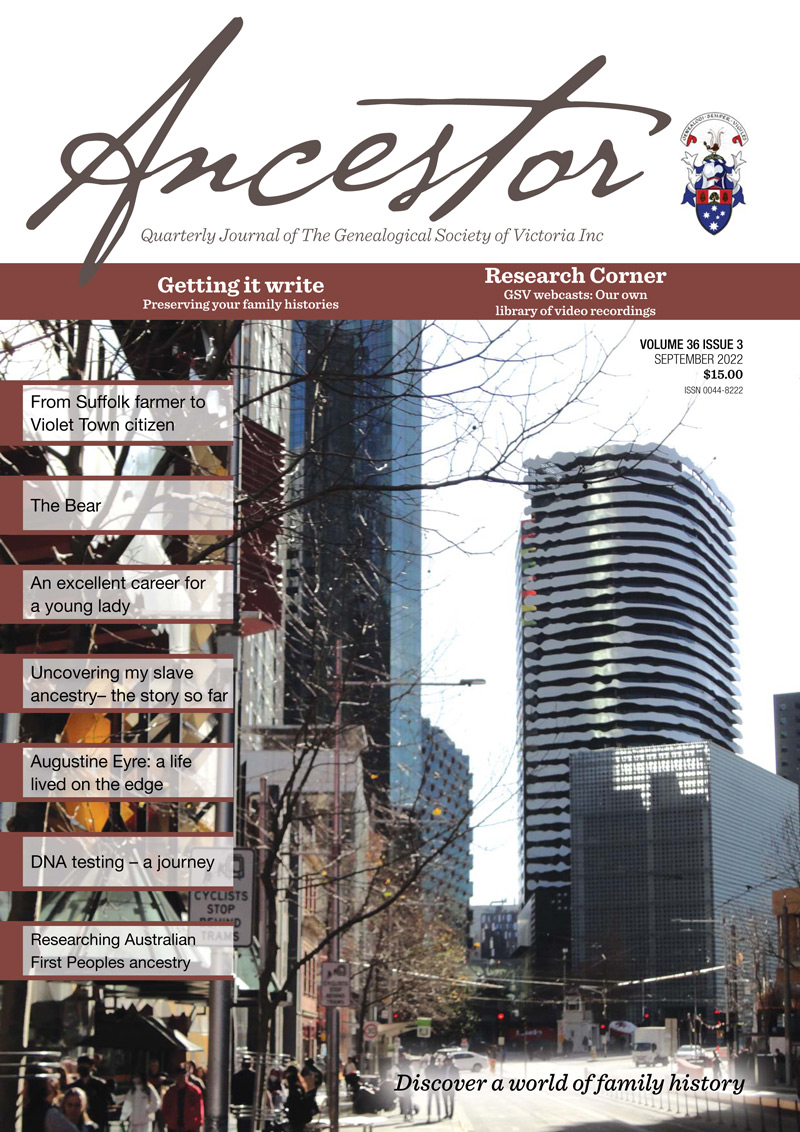 What's in the current issue of Ancestor

September 2022 ( GSV Members can access this journal when they login as a member. Then click on the "Members Area" link)

Recently the Writers Discussion Circle has been encouraging its members to write 350 word pieces on various topics. Cathy Carman’s story ‘The Bear’, telling of a memorable childhood experience, is one of these. Jackie van Bergen’s tale also began as a short piece, and has developed into a full-length article. She describes the career of her grandmother Mavis Long as a mothercraft nurse, training and working at the Berry Street Foundling Hospital and Infant’s Home, as it was then called, in the 1930s.
Bronwyn Kilkenny has tracked down her elusive ancestor, Anglo-Frenchman Augustine Eyre. After settling in Australia, he tried his hand at a range of professions, and contributed to Victoria’s burgeoning reputation in agriculture. But towards the end of his life adventure called again, and he spent his last few years embroiled in controversy.

A chance online search discovery during a COVID lockdown led to Patricia Neville tracing a long-lost sibling of her Suffolk farming family and uncovering a wealth of information about his life in Victoria. Lyell Horwood also made good use of online resources during lockdown. The results of DNA testing gave credence to an old family story of having West Indian ancestry. Lyell set out to find out as much as he could about his ancestor Pryce Innes, and his possible connections to slavery.

To test or not to test? Many of us are mulling over that question. Martin Playne took the plunge, and has written a brief article outlining his early experiences in the DNA adventure, which is a handy guide of what to expect for those who are still undecided.
Following family stories or investigating name changes and adoptions may lead to the discovery of Aboriginal ancestry. This can be a challenging and exciting journey. In this issue we have compiled an extensive guide to the many resources that are available for anyone researching possible Australian First Peoples ancestry. We thank Jenny Bates at Koorie Family History Service and Emeritus Professor Richard Broome for their assistance with this article.